You are here: Home › Thinking about Occupy
I originally titled this page ‘Social isolation and collaboration’, but then it struck me that these two aspects do not couple to form a unit but are in fact separate. So, one can’t logically use ‘and’. The conjunction also cannot be ‘or’ as the two ideas are neither options nor opposites. Social isolation is a problem; collaboration is an approach (which requires mutual respect and acting from equality). This equality must be the outcome for Quakers, who believe there is that of God in every person. It’s hard. Look at someone cursing others and see only that of God in them. Look at someone who scares you, and see that of God in them.
Collaboration is the only solution to social isolation. And social isolation is pervasive, especially in temperate and boreal countries where cold drives us inside, behind walls and doors, to huddle by the fire and keep warm. 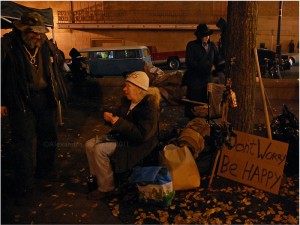 I have been attending meetings of Occupy Portland spokes council as part of the committee on Faith and Spirit. These meetings defy Northern tradition by continuing to be held outside, in public spaces, and despite the cold. I am very glad to be able to get on a warm bus afterward and to come to a heated house, for three hours in the cold is more than sufficient in creep through my layers (especially my socks) and to feel painful. It is hard to really contemplate the pain of people who do not have warm shelters in this kind of cold weather.
I am a photographer. My main theme has been nature, since I spent a lot of time quietly wandering woods, rustling rocks on Atlantic sea shores, and flooding limestone basins in Ireland. Here in Portland, without a car, nature is beyond my reach (although parks are plentiful). Here, I have joined with many photographers, like Kevin Hinkle, to photograph objects: blanks walls with interesting lines, construction and destruction. But things. Many of the people in North America are behind the glass of their cars, their homes, their temperature-controlled offices. In Portland, there are many people on the street and in the buses, but their tattoos and dress was scary to me. I was timid to take their photos. Or even to take out my camera.

As a photographer, the Occupy movement offers opportunities for portraits on the street which is not common in the US (as usually, everyone is behind car glass or window glass).

And then along came Occupy. A visit to the Portland camp with my camera was greeted with courteous smiles, people thanking me for visiting, and a lot of interesting faces and signs to photograph. People in the throes on their convictions are beautiful. So many opportunities for photos – and so much to record in this amazingly persistent and open movement.
Photographing the police moving the Occupiers out of their camp is also important: a record. The interaction. The humanness of the police – and the transformation in appearance with batons at the waist, riot face shield and helmets, and some without the compulsory name tags. The people of all ages and income levels, with peace signs and commitment to non-violence. Together.
Vignettes. The slightly tipsy man with face jewelery that I find a bit off-putting, grabbing the attention of the meeting to say ‘I love you, Occupy Portland!’ and the wave of ‘We love you’ back from the meeting. The other man who looks to live on the street, grabbing the mike and singing:
”Amazing Grace, how sweet the sound, that saves a wretch like me”….  and, when he doesn’t know the rest of the words, a woman with a sweet soprano stepping forward: ”I once was lost / and now am found, / was blind but now I see.”
She steps back. He starts with the last verse: ”When we’ve been here ten thousand years….” but can’t recall the next. She steps forward, ”Bright shining as the sun,/ We’ve no less days to sing God’s praise/ Than when we’ve first begun.”
We are conditioned to ignore these poor, somewhat tipsy people -with their bundled layers of clothes needed against the cold – and to dismiss their singing, their words. To witness the listening by the entire group of dozens of people – activists – of different ages and situations at Occupy Portland is incredibly powerful.
And ‘Amazing Grace’ is one of my favorite songs. But perhaps this is in part from the power of the scene in the film ‘Silkwood’, when this song is the only sound as headlights loom in the rear view mirror of chemical technician and whistleblower Karen Silkwood – before she is found dead in a ‘one-car’ accident which occurred on her way to meet a reporter and a union official to bring documentation of breaches of health and safety at a nuclear plant in Oklahoma.