You are here: Home › Economic justice / inequality › Development and individualism 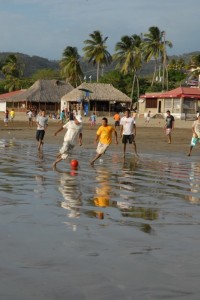 In order to think more broadly about the issues of poverty and what people in the Global North can do, I have been making a point of speaking about these topics with as many different people as possible.

I am fascinated by the influence of each person’s belief regarding society on his or her answers. Today, a man from the US told me there should be access to education. The objective, to him, of education, is that those young people who are smart and motivated can have opportunities to leave their hometown and get jobs elsewhere. This individualistic person was a bit surprised when I asked what the community should aim for in development. It is well known in European forest management circles that the way to impoverish your communityof trees to selection harvest always the best. What remains to seed the new trees are the trees that didn`t grow well or straight. It would be a terrible shame for future societies to have to struggle with their environmental challenges and also the loss of many of the motivated people.

When I asked this American about depressed rural communities in the US, he stated that from communities that had experienced an economic shift (such as logging communities losing that livelihood), those with get-up-and-go got up and went. Those who were not smart enough to be re-trained, he said with a shrug, must have been able to do some kind of job. The difference between his conclusion (that loss of the motivated and possibly cleverer people was a good development) and mine (that the community is still suffering) is the product of our different social political standpoints. (You can see more about this in my page on Thinking about Occupy.) I suspect also that, unless the new career becomes a main focal point in the emigrant`s life, being forced to leave one’s community, weakening or breaking bonds with family and friends, may affect a person’s sense of meaning.

In contrast, a woodcarver here in Copan told me that tourism had been good for this town, and that what was needed was for the surrounding villages to become involved in tourist enterprises that bring money to locals.

In fact, the answers I have been getting when I ask locals what development is needed, both in Nicaragua and in Honduras, have been the same. ‘We need more jobs,’ people say. This sounds familiar. It is the same theme one hears in the US, in Ireland, and probably all over the world. This repeated theme, of employment, hinges on the concept that there is an industry or organization that takes on workers and pays them for their time or effort. It is part of the world’s system of capitalism which plays out as tragedy all over the world. Businesses are considered to be functioning to their best when they minimize costs and maximize profits. Labour is a cost, often the biggest single cost. So, these same businesses which people hope will save them from unemployment, are in fact always seeking ways to reduce labour costs. This is done through increased mechanization, by moving units to countries where people can be paid less, or by hiring temporary workers who can be paid only by hour or piece without additional costs like pensions and insurance, and by other, even less savoury practices. We condemn this seeking to cut costs when we hear, for example, of children stitching soccer balls, but we do not condemn the model which requires of businesses this attitude of cutting expenses. In fact, I can think of two long-time Quaker businesses in Europe which were castigated by more hard-nosed business people (who bought the businesses) for spending too much money on their workers.

Capitalism requires poor people and poor countries: profit-driven businesses need people who will work for little in order to be able to cut costs and supply the fireworks, rubber duckies, carpets, or shoes to the consumer at a lower price than their competitors. The free trade zones (sweatshops) in Nicaragua and Honduras are stitching clothes that may not be cheap to the consumer – but the profit from the brandname does not flow through the supply chain to the various workers. (I want to acknowledge also that some workers are indentured -not free to leave their workplaces without repaying an inflated bill from transport or the company store- and that there are greater problems like people trafficking. But these are generally not legal or accepted, while moving one’s factory to China or India to save on labor costs is seen as clever business moves.) How do we have societies with jobs for people and yet pay fairly? How do businesses wean themselves from seeking always to cut economic costs, despite the social cost? 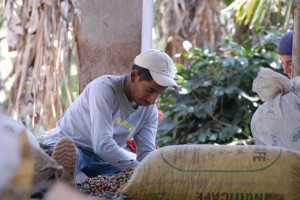 I was at a coffee farm today, where I heard that the people harvesting the coffee were paid US$2 per measure (a five-gallon drum) of coffee berries harvested. It was said most people could fill three measures in a day (note that the berries do not ripen at the same time on a shoot, so each berry is picked individually). So, in five days, a worker could make enough to buy one place in the tour group (US$30 per person) or, in three days, enough to buy a pound of coffee in a Portland supermarket!

What makes up that US$15 pound of coffee in Portland? According to Wikipedia, Fair Trade coffee is sold at a minimum price of US$1.25 per pound. That means that an enormous proportion of the price goes to the roasters and middlemerchants – or, possibly, to the final seller.

During the coffee farm tour, we also saw the same harvest workers cleaning and sorting the berries, which was apparently not additionally compensated. And I am guessing that the piecework jobs are not subject to the national minimum salary of US$300 per month. I suppose this sort of job is the type my conversational partner mentioned above would see as for those too dumb to move away, but I have met people who worked as coffee cutters here. They picked up the work to gain money in their home place, where roots, family, children, and other connections were. Me, well, I do love my coffee, so I am grateful that someone harvests it, and I do think they should be rewarded for the work. Are we ready to have an economy that pays workers adequately (and accepts less profit for business owners)? What do you think?