You are here: Home › Art and being an artist › Saying, and doing

I have another confession about something unusual about me. I seem to be one of few people in the world who doesn’t believe that putting an idea into words makes it real. The concept that many people accept words as the same as action may sound exaggerated, but for most people, and people from many different cultures, a word is just as good as a deed. 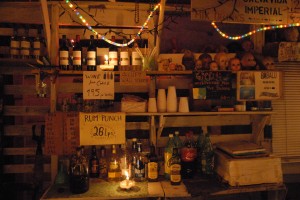 This acceptance of words is frequently played upon in marketing: a product is promoted as `environmentally friendly`, and this becomes the accepted descriptor, without any assessment as to whether that is true. (In fact, a query as to the cirteria is often met with a derisive rebuttal of overly academic questioners.) Another example is people who volunteer for a task and then sit back and enjoy being recognized as a volunteer – despite never actually performing the task.

This tendency to accept the word rather than require the deed is quite pernicious in descriptors of commercialism and poverty. Development is sometimes described as raising the standard of living in a region, when in fact perhaps only a small percentage of the population gains more income.

I am currently in La Antigua, Guatemala, where locals often expect white people to not speak Spanish. (This is a coarse reflection of high proportion of tourists who cannot get by in Spanish.) As in Copan, many locals seem to have managed to make a decent living from tourism, and there are sleek boutique hotels and cafes aplenty. A Sunday brings all sorts of people -including locals- to the streets to enjoy ice cream, laugh at street performers, and finger the many fabulous,  bright hand-woven cotton textiles on offer. One can see footsore indigenous women and children, in colourful skirts and with their bundles of textiles and necklaces, resting in the central square in the evening before trudging to the bus home.

As in other regions, scraping a bit below the surface reveals desperately underpaid and overworked hotel staff. For example, double rooms in one hotel here cost nearly US$20 per night – and the only staff person is paid only US$120 for an entire month of 6-day weeks. She spent her day off collecting firewood and walking an hour back to her home with it on her head, as buying firewood is beyond her budget. This salary has to go to support six children – only one of whom is in school. In a hotel in Nicaragua made very popular by the Lonely Planet, where private rooms cost US$30, 14-year-olds were also paid little, required to work overtime without pay and refused any share of the tips for the entire week if they missed any of their work time (including that extra overtime) or required English classes.

Guatemala in 2008 had a per capita income of US$2847.9 – and  41 percent of the population aged 14 or under. This is quite a bit higher than Honduras´s per capita income of $1956 (also 2008). According to yesterday´s local Guatemalan newspaper, there are many parts of the country where malnutrition exceeds three-quaerters of the population. The money brought by tourism is not touching these starving people. Even those who find jobs in the tourism sector may be malnourished, if the pay scales reflectg what the owners can get away with, instead of what a family needs to be able to live.

Tourism comes for cultural sights, architectural and rituals. These rituals may enact a past meaning, or they may symbolize the identity which helps people survive (in the sense of Viktor Frankl). Last Friday and Sunday, there were a number of processions here in Antigua. It was the first Friday and Sunday in Lent, but already Jesus was carried through the streets dragging his cross, accompanied by Roman soldiers, men dressed as Arabs, and women wearing Spanish black mourning veils. I am struck by the power of the  description in Eduardo Galeano´s Open veins of Latin America (1973, 1997):

“The effects of the Conquest and the long ensuing period of humiliation left the cultural and social identity the Indians had achieved in fragments. Yet in Guatemala this pulverized identity is the only one that persists. It persists in tragedy. During Holy Week, processions of the heirs of the Mayas produce frightful exhibitions of collective masochism. They drag heavy crosses and participate in the flagellation of Jesus step by step along the interminable ascent to Golgotha; with howls of pain they turn His death and His burial in the cult of their own death and their own burial, the annihilation of the beautiful life of long ago. Only there is no Resurrection at the end of their Holy Week.”